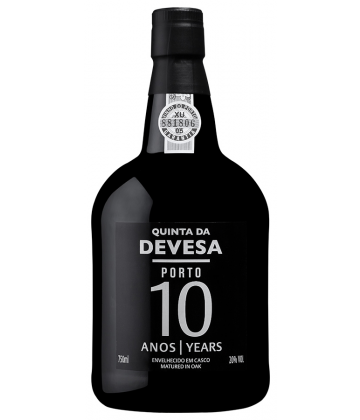 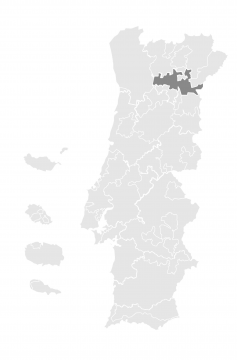 QUINTA DA DEVESA
Quinta da Devesa was already included in the first map of the Douro Demarcated Region, created by Baron of Forrester in 1844. Acquired by Fortunato family in 1941, it has been since then dedicated to Douro and Port Wines. On the Cima Corgo sub-region, and only 10 kms away from Peso da Régua, Quinta da Devesa vineyard and winery are located on a promontory which overlooks the confluence of the rivers Douro and Corgo, from where a wonderful sight can be enjoyed, covering the valleys of the rivers and mountains of the region. Its 34 hectares, planted with the grape varieties recommended for the region, go from a quota of 60 m up to 500 m high, part facing south getting an excellent sun exposure, and part facing the buttresses of Marão,  where it receives natural cool winds. This diversity of solar and wind exposure provides different
levels of grape maturation and development, which allow to temporize harvesting in optimal
conditions

Since 1941, vintages considered of superior quality by the family winemakers, were kept and stored in wooden barrels in the winery cellars. These extraordinary quality wines are used today to produce Quinta da Devesa Port Wines. This Port Wine is the result of a blend of aged wine from Quinta da Devesa, developed with noble wine grapes used in the Douro region, aged over in wooden casks at the Quinta da Devesa cellars.

Sociedade Agrícola da Quinta da Devesa, Lda
0
Fortified wine
Porto - DOC
Since 1941, vintages considered of superior quality by the family winemakers, were kept and stored in wooden barrels in the winery cellars. These extraordinary quality wines are used today to produce Quinta da Devesa Port Wines. This Port Wine is the result of a blend of aged wine from Quinta da Devesa, developed with noble wine grapes used in the Douro region, aged over in wooden casks at the Quinta da Devesa cellars.
Quinta da Devesa Port Wines, are produced exclusively from lots vinified and aged in the estate. Hand picked grapes.
Intense bouquet with hints of dried fruit and slight vanilla.
The palate is complex with soft and long finish.
WINEMAKER : Jorge Sousa Pinto REVIEWS & AWARDS 90 Points Robert Parker – 2018 “The 10-Year Old Porto has a mahogany core with a degraded tawny rim. The bouquet is clean and nicely focused, perhaps just missing a little intensity, with scents of burnt honey, molasses, dried fig and strong nutty aromas. The palate is smooth and harmonious, mellow in the mouth, gently building toward a caressing walnut, black pepper, bitter orange and marmalade finish, yet with a pleasant elderflower note poking its head above the surface on the aftertaste. I found this best served just a below room temperature.” 90 Points Wine Enthusiast - 2015 Gold Medal Berliner Wine Trophy - 2012 92 Points - For The Love of Port (Roy Hersh) - 2014 Best 10 Years - For The Love of Port (Roy Hersh) - 2015

<p>It is in downtown Porto that is the Casa do Carmo, a restaurant with a warm and inviting atmosphere. A relaxed space where the decoration reflects a perfect symbiosis between the classic and the contemporary.<br />Not only known for the quality of their cuisine, but also for the huge variety of snacks they offer.<br />A place to visit where you can taste a wide variety of dishes, or, for those who prefer, various traditional Portuguese snacks.</p> 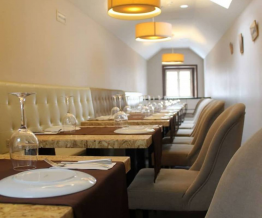 <p>Feel like having a nice evening enjoying Portuguese food delicacies in our cozy restaurant? Visit our restaurant Linos Marquês and taste the delicious delicacies of our fantastic chefs.<br />Our traditional and Portuguese cuisine will reveal to you entirely authentic and traditional dishes. Let yourself be delighted by our divine desserts or our refreshing ice cream with love or as a dessert.<br />We always have a great lunch for you. Our menu offers vegetarian delicacies so our guests can delight in this rich culinary diversity. We want to offer you a tasty and relaxed meal - your health and taste are our top priority.</p><p>Enjoy a night with us<br />It is important for us to be able to welcome everyone without exception. Therefore, we have easy access to our space. Book a table now and enjoy our delicious specialties in a stylish setting. Are you short of time? Then order your meal to take. We are open every day except Sundays.</p> 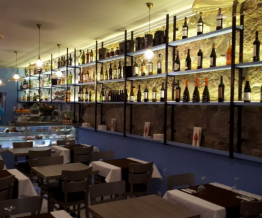 <p>Ahead of one of the country's main railway stations, this restaurant and cafeteria is characterized by a very pleasant atmosphere and quality food allied to the friendliness of the staff and good prices.</p> 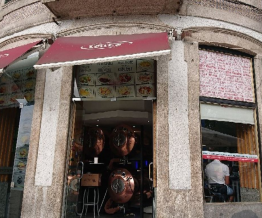 <p>In the winery you will meet people from various nationalities where you can create a good dialogue and feel at home is very easy to meet new people new cultures and a simple meal turns into moments full of new and enriching experiences.<br />We excel for the excellent service and for providing you with a welcoming environment, where the quality and freshness of the products is never neglected.</p> 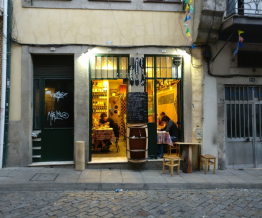 <p>Popular restaurant and brewery from Porto, founded in 1983. Its famous francesinha has one of its main specialties. Restaurant of typical Portuguese and some Italian food, and without missing the real PORTUENSE food. Food cooked in the eyes of everyone without hiding anything from customers. Home cooking and great refinement. </p><p>Located in the Santo Ildefonso area of Porto, you will find the Baju restaurant.</p><p>With a discreet interior where modernity and good taste join hands, this friendly and relaxed space is the appropriate place to enjoy pleasant moments at table and in good company.</p><p>It presents a diverse menu, from which you can taste the salads, omelets, studs, so typical French, hake au gratin, codfish to Braga, octopus to lagareiro, veal chops, Brazilian picanha, tornedó with mushrooms and many other delicacies.</p> 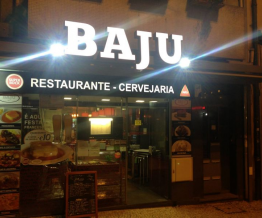 <p>Come visit the oldest cafe in Oporto city, since 1859, where its history merges with its "invicta" city history, UNESCO World Heritage.</p><p>The coffee was founded in 1859 by Mr. Costinha, founder of the extinct Café Avenida and later Café Vitória, located on Avenida dos Aliados. With the departure of Costinha, Café Brasil came to belong to Alberto Arguelhes, a so-called "good soul and a great almoner", who from here went to the Publications Agency, and before the withdrawal in October 1939, pierced the establishment to his "old and jealous" employee António Silveira and his brother-in-law Eduardo Pinto da Cruz, a firm that acquired the social name of Silveira e Cruz.<br />On 2 July 1953, José Domingues Mariz and Frederico Ferreira de Abreu acquired the share of Pinto da Cruz and formed a new company named Mariz & Companhia Lda. José Mariz, as principal partner, was assigned the "Administrative and Office Directorate ". António Silveira was responsible for the "Technical Management of the Coffee Movement" and Frederico Abreu was responsible for the "Cash Service".</p><p>More recently, in the 1980s, coffee and its company was acquired by two of its employees, including Manuel Pereira Teixeira, current and sole owner.</p><p>In 2008 the café expands its activity for catering, making the most delicious meals under the mastery of Chef D. Fernanda Teixeira, the owner's wife.</p> 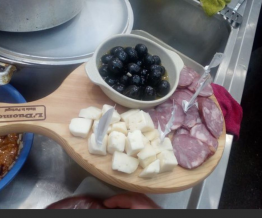 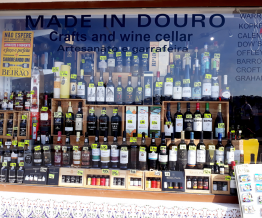 <p>Golden Douro aims to show the world what the Douro has to offer, allying itself with the quality of the small and medium producers of this region.</p><p>In this area we can find Douro DOC wines, Port wines as well as regional products, as well as the handicrafts alluding to the region.</p><p>In addition, you can taste our wonderful nectar accompanied by cheeses and sausages from the region. Visit us and be amazed!</p><p>In addition to being a reference wine cellar, where we have iconic wines from the Douro, we are also a tour operator, cruises and trips in the Douro region, where we intend to help potential visitors to choose places to visit, be they farmhouses, belvederes, heritage, among other activities.<br />It is also our aim to boost the Douro region and its companies, as well as their products.</p><p>We organize various activities, including:</p><p>Cruises on the Douro River<br />Historic steam train<br />Visits to farms in the Douro region<br />Rural Tourism<br />Event organization<br />Equestrian tours<br />Rally paper<br />Visits to monuments, museums and other places of tourist interest<br />Animation of spaces<br />Bicycle tours<br />Motorcycle rides<br />Routes of thematic routes<br />Interpretive paths</p> 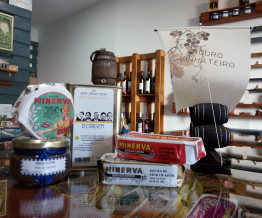 <p>Quality and good taste are always present in our daily lives, as long as we open our arms to receive them.<br />This is what JL Vinhos proposes to you, embracing the quality and good taste present in each of our products.<br />Portuguese wines are, par excellence, the best invitation that Portugal could give you, perhaps to the sound of fado, while savoring the best of Portuguese landscapes.<br />In his own name and on behalf of our producers, JL.Vinhos invites you to travel through the unique palates that each Portuguese region has to offer.<br />If you prefer to meet us in the comfort of your own home, you can also consult the facebook page (Jl.vinhos), where you can also leave your message or place your order.<br />Do not leave tomorrow the quality you can have today.</p> 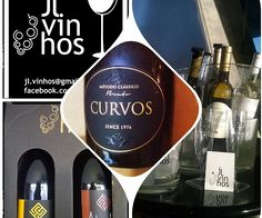 <p>Very peculiar wine bar with a very nice and relaxed atmosphere where friendliness and good mood reigns.<br />Wines from small producers and in most cases little known. Big surprises await you. See you soon ...</p> 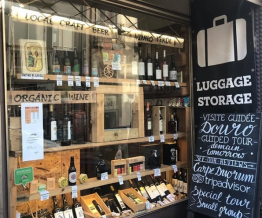 <p>Food and beverage store.</p><p>Your local market with fresh produce, wines, cheese and all kinds of products for your daily life.</p><p>Save more with us! Home Delivery from 25.00 €</p> 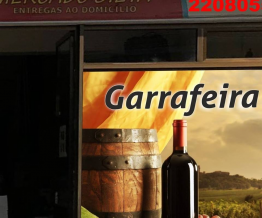 <p>Tapas and snacks in a warm and relaxed atmosphere.</p> 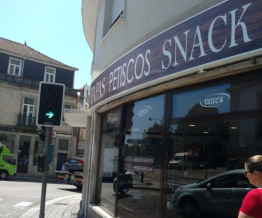 <p>Located in the heart of Vila Nova de Gaia, Terras D´Além Restaurant, is set in a prime location in terms of accessibility as well as tranquility of the surrounding area.<br />The restaurant was designed to provide pleasant moments in a typical, familiar and intimate atmosphere. It has a rustic and traditional decoration and centralizes the preparation of the dishes in oven baked and grilled in the fireplace where the customer can interact in cooking.<br />The oven-roasted kid, the Veal Chop, the Braised Cod and the Octopus Lagareiro are some of the delicacies that we propose to try. The wine cellar has a renowned menu from all regions of the country, giving greater emphasis to Douro wines.<br />The Terras D´Além restaurant offers, in addition to the fixed menu, daily suggestions and attractive prices, varied menus for groups. It is possible to make specific menus, as well as daily suggestions from the Chef.<br />We aim to establish a transparent relationship with our customers, offering a differentiated and personalized service, with comprehensive time service:<br />Sunday to Monday - 12h00 / 24h00<br />Two rooms with capacity for 140 people. It also has a considerable private car park with capacity for 90 cars and a terrace.<br />Enjoy, this house is yours !!!</p> 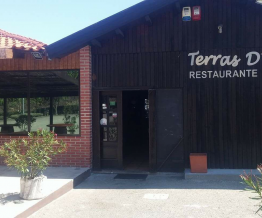 <p>Portuguese culture celebrated at the table! Taste good wine and taste good cheese and sausages - this is the invitation of Wine @ District, a comfortable and pleasant tasting space for Portuguese wines and products, located in the Tasty District, right in front of the Batalha tram stop and at the entrance. of the Funicular dos Guindais. The large terrace overlooks the quiet and peaceful atmosphere of Batalha which meets the ideal conditions for a pleasant tasting of flavors.<br />In this house, the wines are the protagonists! In Wine @ District, in addition to a good wine cellar, you can find a careful list of white, green, red, rosé, reserves and sparkling wines. To accompany the wine tasting, there are various tapas such as sausages and cheese, bread with olive oil, nuts, jams and seasonal fruits.<br />Open Monday to Thursday and Sunday from 12h00 to 00h00 and Fridays and Saturdays from 12h00 to 01h00. For rainy days and cold nights, Tasty, where Wine @ District is located, has a seating capacity for more than 100 people. During the weekends live music concerts provide the ideal setting for experiencing the variety of flavors provided by the Wine @ District.</p> 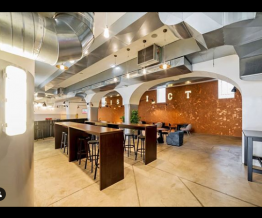 All winemaker wines
We use our own and third party cookies to improve our services by analyzing your browsing habits. If you want to continue browsing, click the "accept" button. You can get more information or know how to change the setting in our Cookie Usage Policy.